Ironically, my dog Bella is on a Paleo diet. 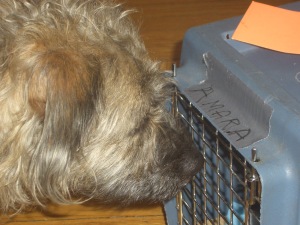 No, it’s not because I’m some paleo fanatic, but because she has itch issues and the vet has taken her off the most common allergens:  beef, chicken, and grains.  I buy her grain-free kibble but then to make it more appealing, I make ground lamb stew to stir into it.   About once a month I traipse to the the meat market that has reasonably priced ground lamb and buy about 5 pounds, then portion it out for single meals.  This month I bought way too much lamb.  As it happens, I had made the Paleo Olive Oil Mashed Potatoes the day before – so Shepherd’s Pie was a no-brainer for the extra ground lamb.

Paleo-izing the Shepherd’s Pie was an interesting challenge.  The potato topping I had already dealt with in last week’s post.  The filling traditionally uses flour (wheat, of course) to create a thick gravy.  My thinking was, instead of substituting an alternate flour for the wheat, why not just let the potatoes be the gravy as well as the topping – after all, I love to smoosh the potatoes into the meat part when I eat Shepherd’s Pie anyway.

The result is a tasty, but less thick meat stew.  I liked it very much as I sometimes find traditional recipes to be a little pasty.

About the vegetables…I confess I use frozen vegetables.  They’re easy and, frankly, I like them.  If you are more ambitious than I, feel free to start with fresh vegetables and cook them before adding them to the meat or just throw in any leftover vegetables you have from previous meals.  It doesn’t really matter what vegetables you use, or even how much you throw in – Shepherd’s Pie is very forgiving.

Though I used ground lamb for the reason stated above, I also love ground lamb; but I know there are many non-lamb eaters in the world you if you are one of them, ground beef or even ground bison would be perfectly fine substitutes.

This is a great  winter meal with protein, starch, and vegetables all in one dish – add a salad for crunch and you are good to go.

You can also add chopped fresh or dried herbs to the meat or to the potatoes if you like.

Salt and pepper to taste

Prepare the mashed potatoes; set aside

In a large skillet, cook the ground meat with the onion and celery until the meat is browned (you will have a good amount of liquid in the bottom of the skillet, but that is okay.  If you have lots of fat…drain off as much as you can).    Stir 1/3 cup of the mashed potatoes and the Worcestershire sauce into the meat mixture.  Cook on high heat until some of the liquid has evaporated and you have a thin “sauce”.  Season with salt and pepper. 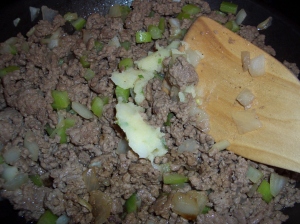 Spoon the meat into a 5-cup oven proof container.  Top with the mashed potatoes.

Bake 30 to 40 minutes until potatoes have browned a little. 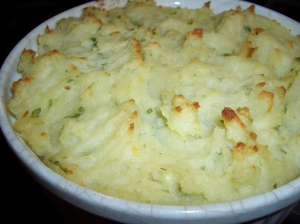