There are many ways to julienne vegetables.  If you have divine knife skills, you need nothing more than a sharp knife and a cutting board.  The chef or gourmet cook probably uses a mandolin… 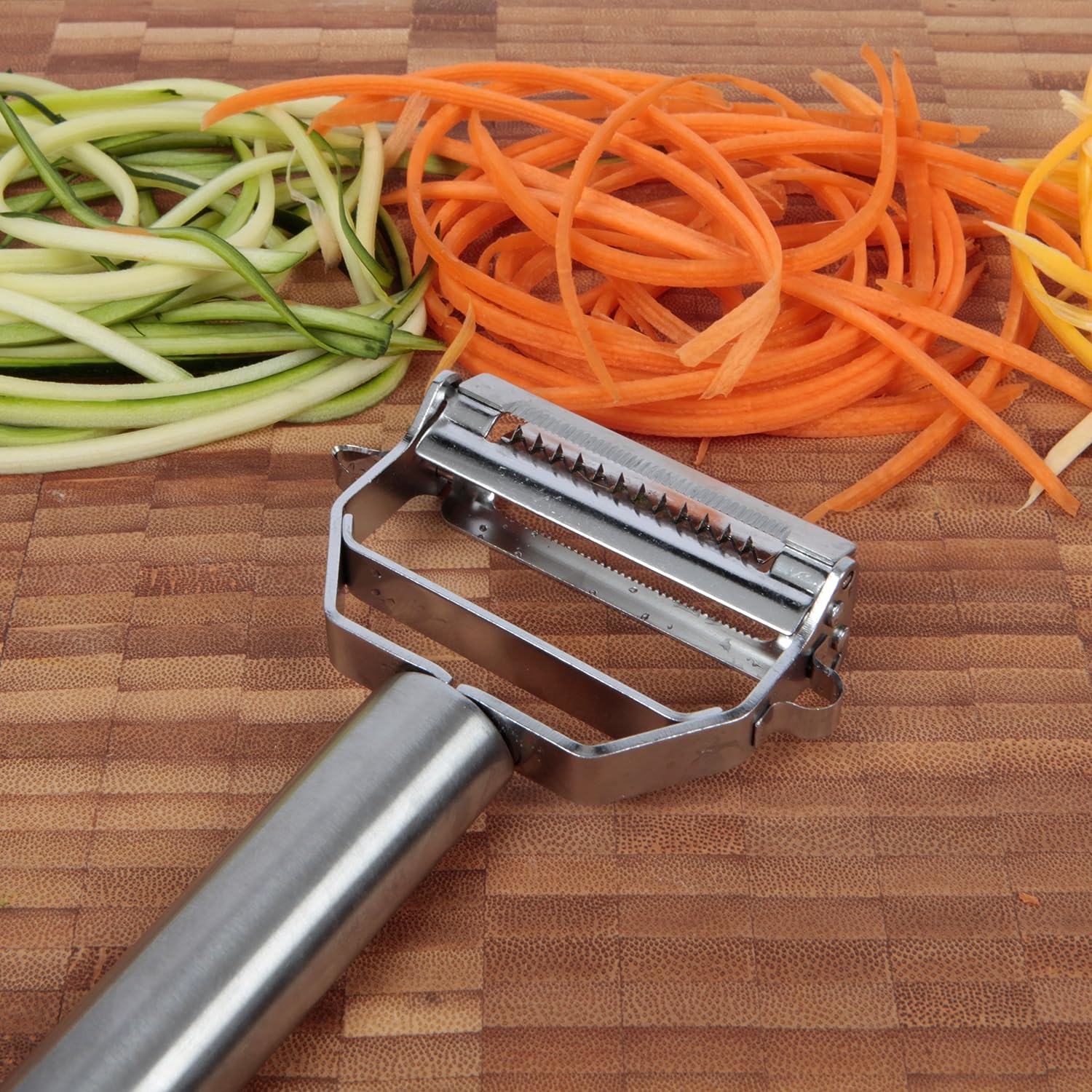 There are many ways to julienne vegetables.  If you have divine knife skills, you need nothing more than a sharp knife and a cutting board.  The chef or gourmet cook probably uses a mandoline – a very sharp and scary instrument that sits in my closet, never used.  There are many types of mandolines varying in price from a few hundred for the classic stainless steel ones to $20 for a plastic one.  Of the less expensive mandolines, I prefer the box type mandoline because it collects the shredded item in an attached container (box).  If you are interested in the box model, Amazon is including 2 ebooks and a video in the $19.99 price…and BTW I couldn’t resist and bought one just now when I went to find a link for you!  Okay, so let’s say I LOVE this mandoline, what about the julienner I writing about in this post.  Will I still LOVE it?

I think the answer is yes.  Yes, because it’s small and doesn’t take up much storage space.  Yes, because you don’t have to clean a bunch of parts just to julienne one zucchini.  Yes, because it does an awesome job and for zucchini it makes really long shreds and I won’t know about the box mandoline until I get mine and try it.

So let’s talk about Zucchetti aka Zucchini Spaghetti.  As you can see, it’s long thin strands of zucchini, cooked and used instead of spaghetti.  It surprises me to tell you that I prefer zucchetti to spaghetti.  The lightness and freshness of the flavor makes real spaghetti seem clunky and heavy in comparison.

Be sure to saute the zucchetti just long enough for it to be softened.  Over cooking it tends to make the strands collapse into each other…still edible but less appealing.  You can saute it in olive oil and garlic for a simple dish.  Or you can add any sauce that you usually like on pasta.  I find meat sauce (recipe coming next week) my favorite but pesto or mushrooms are also delish.

Have fun and enjoy this healthy dish.
END_OF_DOCUMENT_TOKEN_TO_BE_REPLACED

Wheat-free * Dairy-free * Gluten-free *  Paleo ~~ I’m publishing this recipe at the request of my friend Paula W.  We had a dinner date this week and I realized  I’d been doing a lot of…

I’m publishing this recipe at the request of my friend Paula W.  We had a dinner date this week and I realized  I’d been doing a lot of cooking and had a refrigerator full of recipe tests in need of a taster (beside myself).  I’m happy to report that they were all delicious!

This particular dish was Paula’s favorite and she has already called me for the recipe…so Paula, here it is.

Hope you love it too.  Enjoy!
END_OF_DOCUMENT_TOKEN_TO_BE_REPLACED

Wheat-free * Dairy-free * Gluten-free * Vegetarian * Vegan * Parve * Paleo ~~         What is company salad?  Salad that is a little too bothersome to make for just myself (too many ingredients, to…

What is company salad?  Salad that is a little too bothersome to make for just myself (too many ingredients, too much prep time, or too expensive) but is perfect to impress company.  So  who did I want to impress with this salad?

Let’s take a step back.  Those of you who know me well may want to sit down before reading on…I went out of town this weekend.  Shocking, I know.  It’s only taken me ten years to leave the city and visit my friend Lorraine and her husband Pete at their home on one of the finger lakes in upstate New York.

I got there Friday night and the visit was timed so I could attend the Howard Day Parade, an annual event that Lorraine, as town librarian, participates in.  It was a short but sweet parade, a bunch of tractors, vintage cars, the library group and a float from the Howard Historical Society.

The next event was a dance recital followed by cake in the library.  It was fun meeting the library staff and other of Lorraine’s friends.  Following the recital was the annual “chicken lunch” served in a local hall (we took ours home to eat).

Then Pete drove us to a wonderful farm stand they frequent.  The tomatoes were divine, we bought beautiful wax beans, sweet-sweet blueberries and I can’t remember what else.

Being a good guest, I brought them NYC bagels and a brisket (I think a good brisket is really hard to find).  So Saturday night I was the cook.  In addition to the brisket we had fresh local corn, Roasted Green Beans with Tomatoes and Balsamic Vinegar (that I posted 2 weeks ago) and Company Salad.

When I started to prepare the dinner we discovered that the wax beans (I was using the yellow beans instead of the green beans) had either been left at the farm stand or lost somewhere on the way home.  Pete insisted on going back to the farm stand to get more beans for us.

Lucky for me Lorraine has a home filled with lots of healthy goodies.  She had a pile of beets she had roasted before I came, avocados that were ripe, 2 oranges (though I used just one of them), a few lovely bing cherries, and a box of organic salad greens.  Of course she had lots of other things I could also have used but I was really good about editing myself.

The pistachios were the only thing I wanted that wasn’t in the house so we called Pete and asked if he would pick up the nuts while he was getting the beans.

Dinner was delicious but the star of the show was the out-of-this-world salad.  Hope you love it as much when you make it!
END_OF_DOCUMENT_TOKEN_TO_BE_REPLACED

Wheat-free * Dairy-free * Gluten-free * Paleo ~~~ I really love the fish department at Whole Foods, so whenever I’m there I check it out to see if something is calling to me.  This week it wa…

I really love the fish department at Whole Foods, so whenever I’m there I check it out to see if something is calling to me.  This week it was the mussels – they were the small ones that I prefer (though I know many people live the larger meatier ones).

I usually try to buy only wild caught fish, mussels are the exception.  The difference between farmed and wild caught mussels are….sand – and lots of it.  Although I rinse and scrub my mussels before cooking them, no matter how hard I work there is always at least a few gritty mussels.  Now I like gritty people just fine, but gritty shellfish (or vegetables for that matter) are just not acceptable.  To explain the difference between farmed and wild here’s a piece from Sunset magazine  http://www.sunset.com/food-wine/flavors-of-the-west/seafood-farmed-or-wild :

Clams, oysters, scallops, mussels are the ideal farmed seafood. In the wild, they may be harvested using hydraulic dredges, which rip up the ocean floor.

Farming, on the other hand, involves either raising the mollusks on beaches and hand-raking to harvest, which has very little impact on the beach itself; or growing them on strings hanging from floating platforms or in metal-mesh sacks laid on floating racks, neither of which does any environmental damage whatsoever.

Moreover, these little bivalves eat plankton, so do nothing to deplete other fish populations. And best of all, they’re filter feeders, leaving the water cleaner than it was before.

Now about the sauce…I use store-bought Thai green curry sauce (I bought it at Whole Foods but I know they also carry it at Trader Joe’s and most gourmet stores have it in their Asian section or of course you can find it online).  I don’t feel guilty about buying it prepared as there is a large list of “unusual” ingredients that goes into it like galangal, lemon grass, coriander roots, and shrimp paste.  Surprisingly the prepared pastes are generally paleo.  Check the label before you buy it.

This is one really delicious way to prepare mussels.  Enjoy!
END_OF_DOCUMENT_TOKEN_TO_BE_REPLACED

Another recipe straight from my expedition to the farmer’s market .  The green beans just looked too perfect to pass up and the grape tomatoes were sweet as candy.  These are great served warm or cold and are another of those recipes perfect to bring to a picnic or pot luck.

I’m feeling kind of stuck here for a longer narrative to share with you about this recipe or these ingredients, but this is just a straight forward recipe I created because I had great ingredients on hand.

It may not be an especially beautiful dish but it’s taste makes up for its looks.  You’ll love it – really!