Last Passover my friend Hadley and I decided to have a leftovers dinner.  Since we each held a seder in our homes, we were unable to attend the other’s seder and this way we could at least taste what the other had served.

Now, not to be boastful, I am an awesome cook and the food at my seder was amazing.  We both made pot roast from brisket and used approximately the same recipe so that was a wash.  Our Tzimmes’ were both delicious in different ways – mine had a very deep richness and Hadley’s had a fresh quality to it that I liked (so much that I’ve made it for this year).

Our menus diverged at the kugels.  I made a matzoh kugel using matzoh farfel, chopped carrots, onions, celery, and parsnip.  I moistened it with vegetable broth and olive oil and seasoned it with salt, pepper, chopped parsley and dill, and poultry seasoning.  This dish has been a hit for the past 15 years – but then I tasted Hadley’s potato kugel and I was blown away.  It was the best potato kugel I had ever tasted.  The other thing about it was it’s paleo and I can eat it!

So here is the recipe with very significant changes but equally fabulous results!  Enjoy!

Hadley’s recipe called for squeezing the liquid out of the shredded (Idaho) potatoes (what a PAIN) but that didn’t make sense to me since you were going to be adding water into the recipe.   So I used russet potatoes and they were kind of dry so skipping the squeezing worked just fine.

Preheat the oven to 425°.  Line a 9 x 13-inch baking pan with aluminum foil.  Add the shallots and toss with 2 tablespoon of the olive oil.

Bake 20 minutes.  Stir and bake 5 to 7 minutes longer or until the shallots are a mix of golden and deep brown; set aside (be careful – I cooked them 10 minutes and many were burnt to a crisp- see photo).

In a very large bowl, beat the eggs with the remaining 1/2 cup olive oil.  Add the  shredded potato, the chopped onion, salt and pepper to the bowl with the eggs.  Stir to coat with the egg.

Add the roasted shallots and mix will. 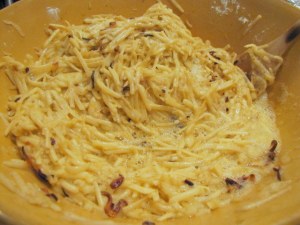 Take a small amount of the potato mixture and fry it in a small pan of  hot oil.  Taste to make sure you like the amount of salt and pepper.  Adjust seasonings accordingly. 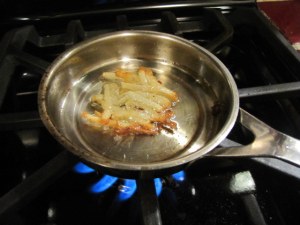 Put the potato mixture into or two 8 or 9-inch square pans. 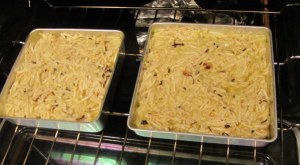