I had an all day brunch yesterday, a yearly tradition, and some of my 30 guests felt the need to bring a gift.  I enjoy receiving gifts as much as the next guy but I do have very definite ideas of what constitutes a good house gift and what’s a not so good one.  As you can see, not too many people brought gifts – and that’s perfectly okay.  Of the gifts I received some qualify as good – or even great – and some not so much.

Let’s start with the great gifts…Oh, they’re not in the photo…most great house gifts are the ones that get used up before the guests leave.  One person brought a salami – I think it had wine and garlic – but whatever type it was, it was delicious and there was none left (which is too bad as I might have had some for breakfast).  Another gift that earned top honors this year was a bottle of grog (spiced wine) that we heated and served and was really delicious (I had to go into the garbage room to retrieve the bottle so I could photograph it for you) – the Persecco also ranks high but I just didn’t get around to serving it. 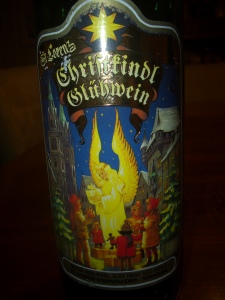 Presents for the pets (or kids) are always appreciated.

Chocolate is also a good choice.  This box of chocolate sticks was really yummy – though I think I was the “guest” who ate most of them.  The bear is nice for children. 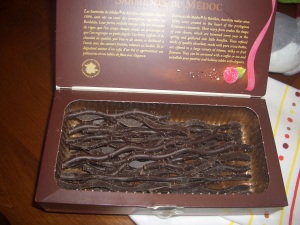 Cookies.  Again no photo ’cause they are all gone.  Cookies are always a good gift because you can serve them right away, if you want.  But if you’re bringing cookies make sure they’re really good ones (and that depends on taste, in some instances packaged cookies are fine). One guest brought a dozen French macarons – those multicolor sandwich cookies.  In this instance some of them were delicious and I confess, since they arrived late and there were few guests left to eat them, my last guest and I bit into each cookie – some we ate and some we threw out (sorry D.).

The towels, pot holder and candles are neutral house gifts because they have a limited lifespan.  They’re okay if you like the ones that were brought, but mostly they find themselves in the “pass along” cabinet.

Large gifts and gifts you are expected to keep over a long period of time or worse – forever – are terrible gifts unless you know positively it’s what the hostess wants/needs.  The basket was a fine gift because my friend, who is getting rid of a lot of stuff, called and asked me if I want it before she brought it.  Gifts like vases or chatckis (brik-a-brack) that the hostess is expected to display are awful gifts.

and then there is my personal least favorite house gift – flowers.  Now don’t get me wrong – I love flowers.  I always buy and arrange my flowers long before my guests arrive – I would never think of waiting for the guests to bring them to me.

Handing me a bunch of flowers when you arrive means I have to find a vase, deal with the paper around the flowers, cut the stems, and arrange the flowers all while I am still cooking and greeting guests.  If you really want to give the hostess flowers, send them early in the day or bring already in a vase so the hostess doesn’t have to deal with them when you arrive.  Or you can send them the next day as a thank you.

so here is Carol’s Rule for House Gifts:  Food and Beverages are good; Anything that gets used up is good; Anything permanent is undesirable; Flowers are only good if I don’t have to do anything to them during the party.  And as for the Ugly…Don’t Bring Ugly Gifts EVER!