I was recently asked what my favorite restaurant is – a question I find very difficult to answer because it depend’s on my mood.  Certainly if I’m in the mood for French food the answer would be different from times that I crave a pastrami sandwich.  As I thought more and more about the subject I found that the more important question is what restaurant or type of restaurant do I leave feeling really good and happy after the meal.  Surprisingly, the answer was not one of the extremely excellent (usually expensive) restaurants I frequent occasionally, but rather the meals that I make me happiest are generally macrobiotic.  I rarely leave a fancy restaurant feeling as satisfied, happy, peaceful, and I admit, a little self righteous as I do following a simple meal of brown rice, salad, and steamed or sauteed vegetables.  The beauty of this realization is that I don’t have to go to a restaurant for a macrobiotic meal and so I have pulled out my rice cooker (more about that another time) and am making simple dinners that are loosely macrobiotic and I find it’s a lovely way to unwind at the end of the day.

That all being said, I decided I would like to make miso soup to add to my macrobiotic repertoire.  The base for miso soup is dashi, a broth made of seaweed (kombu) and dried bonito (fish flakes).  Dashi is used widely in Japanese cuisine.  Although I like miso soup when I go to restaurants the thought of bonito was not my cup of tea.  So, I decided to find a way to make it without the fish; what I ended up with is part Japanese, part Chinese.  I know that dashi is full of umami.  Umami is the fifth taste along with sweet, sour, bitter, and salty – umami is best described as earthy.  Knowing that mushrooms are a just loaded with umami, I decided to add that to the broth along with the kombu.  Then, just because I had them in the house to make hot and sour soup, I threw in a few dried lily buds (I don’t even know if they are used in Japanese cooking) and just to ensure enough flavor I added some soy sauce and mirin.  Once you have the ingredients in the pantry, this is an extremely simple broth to make.

Though I’ve photographed the dashi in a bowl with chive blossoms, I would not really eat a bowl of dashi.  It is, for me, strictly an ingredient.

The longer you let the vegetables steep, the more flavorful the broth will be.

1. In a 1 1/2 or 2 quart pot, bring the water, mushrooms, lily buds ,and coconut aminos to a boil. Reduce heat and simmer 5 minutes, uncovered. 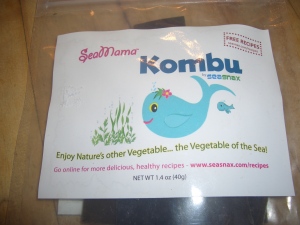 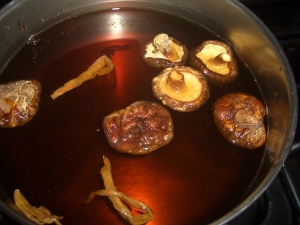 2. Remove from heat. Make sure water is NOT boiling. Stir in kombu; let stand 2 or more hours.

3. Pour the stock through a strainer;

Using a spoon press the liquid from the vegetables into the stock. 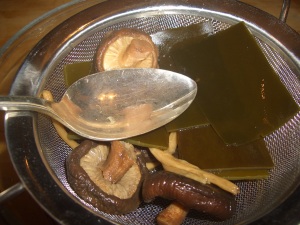